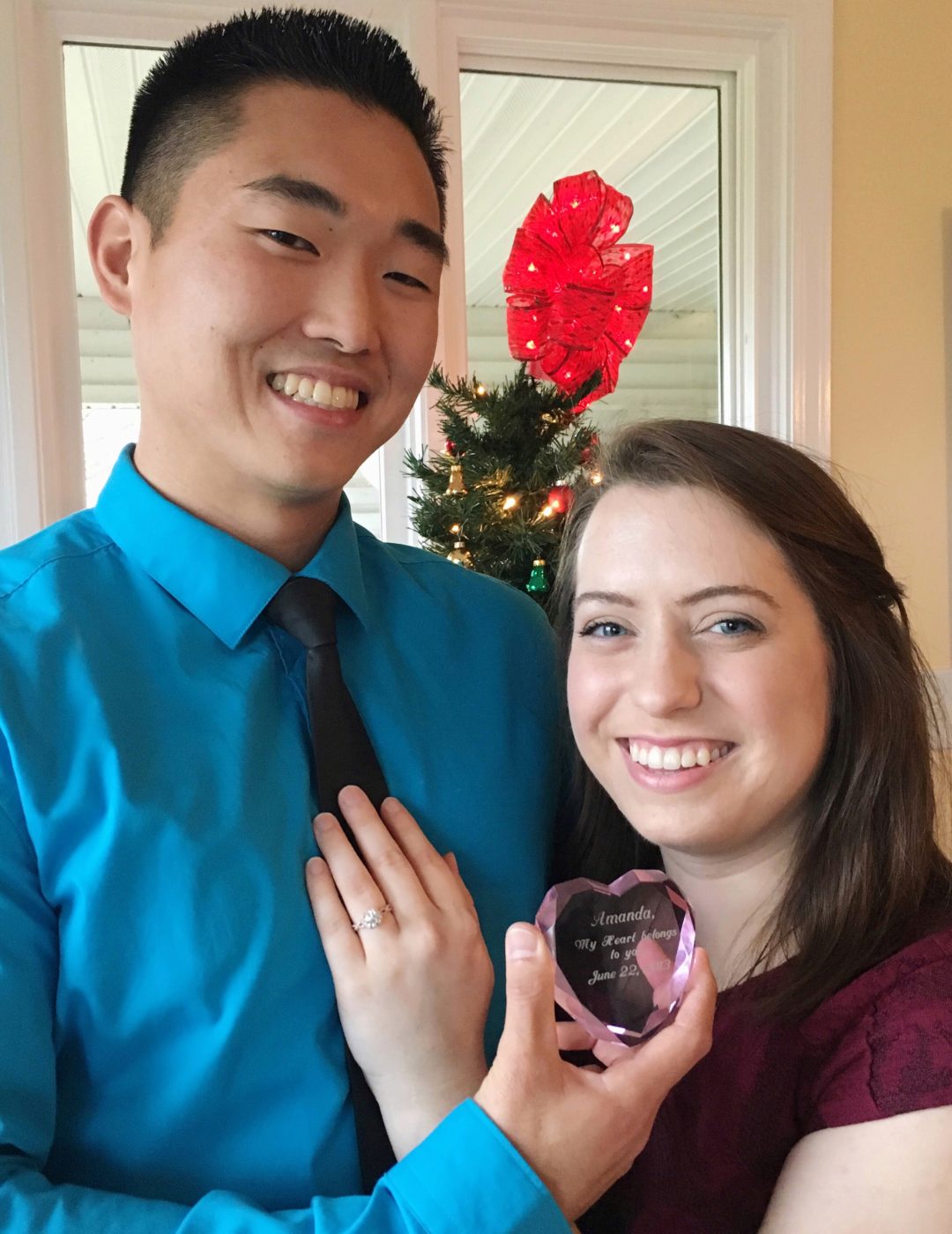 From Amanda’s Point Of View:

On Christmas morning, at my grandparent’s country Kentucky home, with my grandma, grandpa, parents and sister in attendance, Eddie hid a present to save as the last gift of the day.
At what I thought was the end of all the gift giving, Eddie went and retrieved a small neatly-wrapped box and handed it to me saying there was one more gift.
Standing in front of my parents, sister, grandma and grandpa, I opened the gift where inside I found small pink glass heart engraved with “Amanda, My heart belongs to you.” And “June 22, 2013” – the day we began dating.

After that, I turned around to find Eddie standing behind me with a speech in hand. He read his kind, heart-felt speech to which he ended with pulling out a ring box, getting on one knee, and saying “so today I stand in front of you and your family and ask, Amanda Grace Blanton, will you marry me?” I replied, “of course!”

From Eddie’s Point Of View:
She said yes! …. actually, she said “of course”, but that’s a yes! 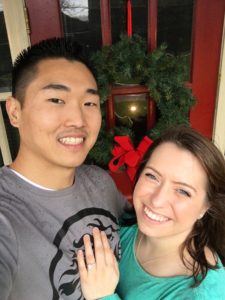 Amanda’s Side of the Story:

Eddie and I met through a Building Church event in the summer of 2013. I started going to church there in Spring 2013 and Eddie had already been attending for a year. Surprisingly, we did not really cross paths at all for the first few months because Eddie would go to first service and leave as soon as he could so that he could get to the gym and not have to fight for time with the weights and I would arrive at the start of second service because I was in college at the time and had a habit of staying up late and sleeping in late.
We finally actually met a few months into me attending Building Church because we both went to a group outing at a restaurant called “I Love Sushi”. It’s actually surprising I went because I don’t really like sushi at all, but I was excited to hang out with some new friends so I showed up. When I showed up, Eddie was already there, among other people. I had to find a seat where there were still openings so I ended up sitting across the room from him so we didn’t “meet” and actually talk until we were leaving the restaurant. After dinner the entire group went to a frozen yogurt shop across the street and that’s where we really actually met and started talking. I remember thinking how he was funny and goofy.

After that night, we had friended each other on Facebook, but hadn’t spoken much beyond that night until my sister’s car started giving her weird trouble and I remembered Eddie had been talking about his yellow car and working out so I figured I could ask him for advice on what was wrong with the car (He was so excited that I messaged him. Reading those messages now… Eddie had no chill when I first messaged him haha). We chatted a bit about the car then started just talking in general.

As the next few months passed we hung out whenever we were in groups, and eventually after quiet a while, we went on an actual date together and we have been together ever since.

Eddie’s Side of the Story:

I first met Amanda back in April 2013 at a young-adult church hangout. At first, she caught my eye because I have not seen her at church before. So after our group dinner, we hung out and I got to know a little about her.
Soon after, we started messaging and texting each other and about 2 months later, we made our relationship official. I was nervous at first, but there was something about her that always calmed me and made me feel at peace with her.
Fast forward 2.5 years later, and Christmas 2015 was upon us. I have been thinking for some time about our relationship, and how we have overcome so many obstacles together, I couldn’t really see, or want any other person next to me. With that in mind, I decided to email her father for a quick lunch, he was not aware for the question I was going to ask him. I had the intention of asking him for Amanda’s hand in marriage. At the end of our lunch, I finally asked the question, and he gave his blessing for a proposal. So after I asked his daughter’s hand in marriage, we began planning. With Christmas only a few weeks away, I knew that this Christmas would be one to remember.